The original story may be found here.

UNIVERSITY PARK, Pa. — After 25 years of annual gifts supporting students in the School of Labor and Employment Relations in Penn State’s College of the Liberal Arts, alumnus James Bowers has made a $100,000 pledge to ensure that funds would be available forever, especially for students in need.

The Bowers Family Fund in the School of Labor and Employment Relations will be endowed through the future estate of Bowers and his wife, Patricia “Trish” Bryant Bowers. When the gift is realized, its proceeds will recognize and provide financial assistance to outstanding undergraduate students in the school who are fulfilling educational and professional objectives by participating in a study abroad program.

“To be ready for careers in human resources and employment relations, students need to be exposed to different organizations, different places, and different ways of doing business,” said Clarence Lang, Susan Welch Dean of the College of the Liberal Arts. “With his generous estate commitment for students studying abroad, Jim will give more aspiring professionals the opportunity to witness the way other countries approach this important field. I am grateful to him and his wife Trish for supporting one of our highest priorities in the college: career readiness.”

“It was the only school I applied to,” he said. “I looked at other schools, but a combination of the fact that it was state-supported and a big school, had a great football program, and had a very good psychology department was what attracted me.”

While at Penn State, Bowers said he studied hard and took full advantage of his time. He played clarinet in the Blue Band, served as a residence counselor, and was a member of Acacia, a fraternity with whose members Bowers remains in touch.

Bowers earned his bachelor of science degree in industrial psychology in 1967, after which he served for two years as an officer in the U.S. Navy aboard the USS Saratoga aircraft carrier. He earned a master’s degree in industrial and labor relations from Cornell University and launched a successful career in labor relations and human resources, retiring as vice president of The Hay Group, a global human resources consulting firm, where he was employed since 1979. His consulting focus was on total compensation at all levels for global organizations. Trish Bryant Bowers is semi-retired after a 30-year career in real estate. She holds a bachelor’s degree from the University of Pennsylvania and a master’s degree from Temple University.

“My parents were deeply religious and believed in tithing [giving ten percent of one’s income to the church],” said Bowers when asked about his philanthropic focus. “I didn’t come to philanthropy in the usual way, but being successful in my career, I knew that I wanted to give back. I think it’s important to give back some of the success you’ve had, so it developed sort of naturally.”

While his affinity for his alma mater has been lifelong, Bowers said an invitation to participate in a career fair in the School of Labor and Employment Relations motivated him to reengage. He soon was asked to join the school’s Alumni Advisory Board, where he has served for more than a decade. In 2017, he received the Outstanding Alumni in Business Award from the College of the Liberal Arts.

“It was all very unexpected, but I was glad to be acknowledged for making a contribution to my field,” said Bowers.

His decision to create an endowment to support students studying abroad stems from his international consulting work.

“It struck me that a lot of people coming out of the U.S. didn’t have much experience internationally,” he explained. “I would really like to see students have a different perspective by seeing what happens in other countries. In labor relations and human resources, every country does it differently. I hope that the endowment will provide a broadening experience, especially for those who might not otherwise be able to afford it.”

“Studying abroad is such an amazing learning experience — being immersed in another culture, surrounded by new and exciting opportunities. As instructors, we can see the students learning and growing every day,” said Elaine Farndale, acting director of the School of Labor and Employment Relations and associate professor of human resource management. “We are so grateful to Jim for this incredibly generous gift that will enable more students to have this life-changing opportunity.”

Bowers supports other organizations, particularly those related to food insecurity and education. He is past president of the Philadelphia compensation and benefits association (PEBA), a former board member for Achievement House Cyber Charter School, and a past board member and continuing human resources advisory committee member of Philabundance, a hunger relief organization. Currently, he is on the allocations committee of the United Way for funding hunger relief organizations in Palm Beach County, Florida.

“I give to Penn State because it gave me a great experience in my formative years and started me on my career,” concluded Bowers. “Creating an endowment through my estate seemed like the best way to secure my legacy and to pass something on to my alma mater.”

The Bowers Family Fund in the School of Labor and Employment Relations helps to advance "A Greater Penn State for 21st Century Excellence," a focused campaign that seeks to elevate Penn State’s position as a leading public university in a world defined by rapid change and global connections. With support from devoted alumni and friends who believe in Penn State and its mission, “A Greater Penn State” seeks to fulfill the three key imperatives of a 21st-century public university: keeping the doors to higher education open to hardworking students regardless of financial well-being; creating transformative experiences that go beyond the classroom; and impacting the world by fueling discovery, innovation and entrepreneurship. To learn more about “A Greater Penn State for 21st Century Excellence,” visit greaterpennstate.psu.edu. 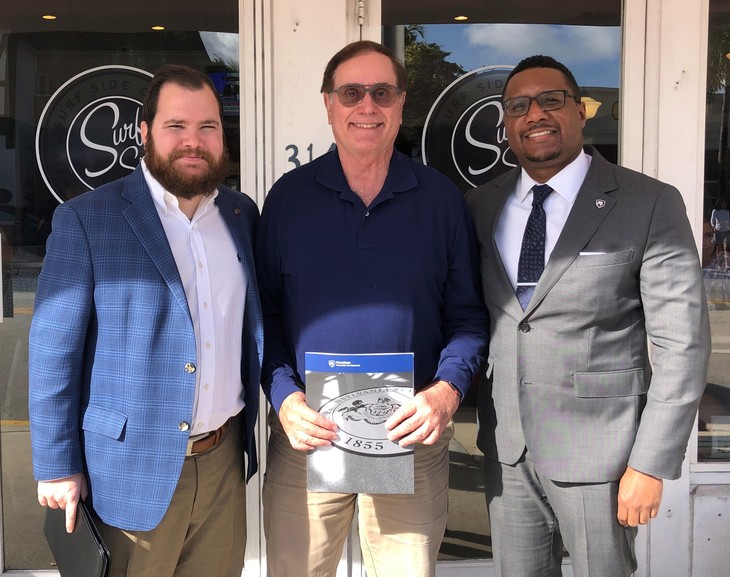