No upcoming events - check back soon!

Symposium on LABOR INFORMALITY IN COMPARATIVE PERSPECTIVE: TOWARD A MORE JUST FUTURE FOR WORKERS

The Center for Global Workers’ Rights is proud to host another Spring Symposium and hopes it will be useful in guiding the efforts of scholars and practitioners toward addressing labor informality across various contexts. Weaving together empirical data, historical narratives, and contemporary reflections on labor informality in comparative perspective, we will together ask: How can workers build power in the informal sector? How can our work, practice, teaching and organizing increase worker protections, standards, and dignity in the informal sector? Moreover, how do we bring about a more just future for all workers? You can review the program booklet to see all of the talks from the Symposium.

The Center for Global Workers’ Rights is proud to host another Spring Symposium and hopes it will be useful in guiding the efforts of scholars and practitioners toward addressing precarious work and worker health concerns in Global Supply Chains. This will be done through a frank discussion on the lessons learned from current initiatives and a review of relevant scholarship and work that needs to be done as we move forward. The symposium will adhere to the Chatham House Rule by which “participants are free to use the information received, but neither the identity nor the affiliation of the speakers, nor that of any other participant, may be revealed.” Review the program booklet to view the speakers from the Symposium.

Anner, Mark. “Stopping the Race to the Bottom: Challenges for Workers’ Rights in Supply Chains in Asia.”

Pandita, Sanjiv and Fahmi Panimbang, “Global Supply Chains: Struggle within them or against them?”

Rosenbaum, JJ, “The world watches the US on labor abuse.”

Smith, Ted and Chad Raphael, “The Future of Activism for Electronics Workers.”

von Broembsen, Marlese and Shae Godfrey, “Labour Law and Development Viewed from Below.”

DIGNITY FOR ALL: HOW AND WHY WE PASSED THE MASSACHUSETTS DOMESTIC WORKER BILL OF RIGHTS

Lydia Edwards is a new kind of Labor Leader. As an architect of the Massachusetts Domestic Worker Bill of Rights, she coordinated grassroots efforts to implement the law. 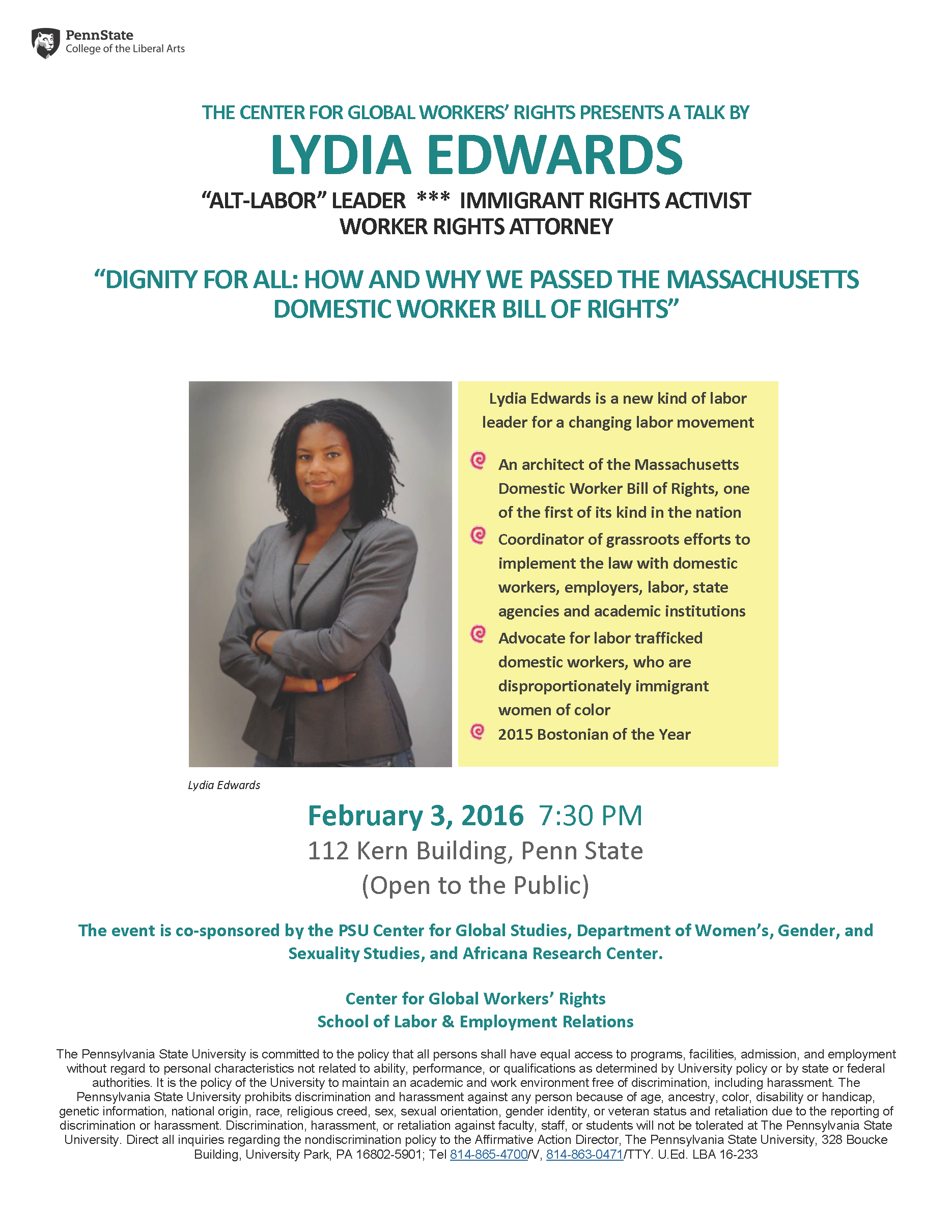 The Future of Care: What We Need for a Changing America

Members of the Center for Global Workers’ Right listen with Ai-jen Poo following her talk on February 11, 2015 on “The Future of Care: What we need for a changing America.” Ai-jen is the director of the Domestic Workers Alliance and a 2014 MacArthur “Genius Grant” Fellow 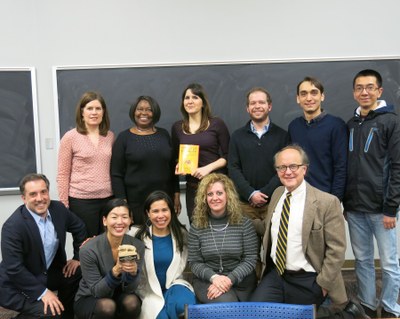 Justin McBride is the Campaign Director for the CLEAN Carwash Campaign, and works for the AFL-CIO. He was first exposed to unions with the garment workers’ union, UNITE, in New York City, while he was pursuing undergraduate studies at Duke University in 1999. Upon graduating, he became a staff organizer, and has been helping workers form unions ever since in a variety of industries, including laundry, warehouse, industrial, janitorial, construction, and now carwash workers. Justin began working on the CLEAN Carwash Campaign in 2008.

The carwash industry has become part of the underground economy of Los Angeles and other cities in California, with many carwashes failing to abide by basic labor and health and safety law. Los Angeles carwashes have been equated to the modern day sweatshop. The (CLEAN) Car Wash campaign is a joint effort between the Community Labor Environmental Action Network (CLEAN), the Carwash Workers Organizing Committee (CWOC) and the United Steelworkers (USW). Begun in 2007, the campaign has brought together a diverse group of immigrants’ rights, legal, labor, and community organizations to improve the lives of working families throughout California and across the Los Angeles area.