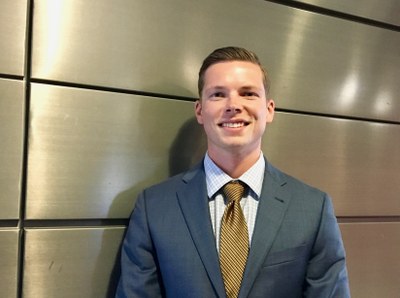 My name is Kyle Larson, I’m from Middletown Delaware, I completed my Bachelors of Science from Penn State in 2021, and I’m currently pursuing my Masters in Human Resources and Employment Relations (expected May 2022). Before I came to Penn State, I served in the United States Marine Corps for 4 years as an 0311 Infantry Riflemen. I was attached to the 2nd Battalion, 5th Marines in Camp Pendleton California for most of my career. I became a squad leader after my first deployment and was responsible for 13 other marines as well as over two million dollars worth of equipment in my squad. In addition, I was a Marine Corps Instructor of Water Survival and trained over 100 Marines in water survival as well as served as the subject matter expert, coordinator, planner, and safety swimmer for water survival and other various aquatic training events.

After serving in the Marine Corps, I chose to continue my education at the Pennsylvania State University. Being a Non-traditional student, I had a rocky transition back into academic life. Eventually, I found the Penn State Veterans Organization (PSUVO) which helped foster relationships and made me feel at home at Penn State. I was elected as the PSUVO President in 2018 and still continue to serve in this role today. In addition to serving as the PSUVO President, I’m also a sponsor for the Office of Veterans Programs where I mentor incoming veterans, help them access their GI Bill benefits and VA healthcare, as well as provide peer-to-peer counseling.

After graduation, my goal is to secure a job in Human resources and gain the experience to move up the ladder. My particular interests are in training and staffing, total rewards, employment law, and consulting.