You can read the original story here.

What enrichment activities did you participate in as a student?

What was your first job after graduating from Penn State?

My first job after Penn State was as a rotational HR analyst at JPMorgan Chase in Wilmington, Delaware. I was part of the two-year HR analyst development program, where analysts rotate through four different areas of human resources for six-month periods. This was the perfect role for me after college, because it allowed me to explore different areas of HR to see which area I would like to pursue long term. I rotated through compensation, data analytics and reporting, learning and development, and project management.

What was your favorite class?

My favorite class was PSYCH 281 Introduction to Industrial/Organizational Psychology with Greg Loviscky. I was always super interested in psychology but I never had a class that focused on psychology in the workplace. This class also introduced me to human resources in a way I hadn't learned prior. After taking this class, I knew HR was where I wanted to build my career. Greg was also super enthusiastic and personable which made learning even more exciting!

How did your liberal arts education and skills prepare you for life after graduation?

One of the great things about a liberal arts education is that there are so many transferrable skills that you can apply in and out of the workplace. The College of the Liberal Arts has endless resources that I definitely recommend taking advantage of. The Career Enrichment Network was also instrumental in my success in college and prepared me for my post-grad plans.

What networking advice would you share with current students?

Networking has been an instrumental part of my career journey. Most of the roles I've had since I've graduated have been a product of putting myself out there and networking. It can be a little intimidating at first, but it becomes more natural over time. I have been in campus recruiting for about four years, and I have found that networking with students adds additional background/context to a candidate's experience/brand beyond what is written on their resume. Keep in mind that at one point, it was everyone's first few times networking so don't be nervous to put yourself out there!

What role have mentors played in your career progression?

Similar to networking, mentorship has been a major factor in my career journey. Since college, I have always looked to align myself with mentors who I could emulate and learn from. During my time at Penn State, I was matched with KerriLaine Prunella as part of the Liberal Arts Alumni Mentor Program. Kerri was beyond helpful for me as I explored potential internships, built my résumé/cover letter, and even prepped for interviews. I've continued to connect with Kerri even after graduating, and she's always been there to help. You can never have enough mentors! 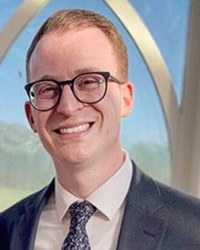